The Family History Group met on 2 December and it was lovely to catch up with so many people.

The topic was the eagerly awaited (especially by those of us with some English ancestors) 1921 England and Wales census which will be released on FindMyPast on 6 January 2022.  FindMyPast bought the rights to publish the census. To recover digitisation costs, even for those with a subscription, there is a charge  to view the records at 2.50GBP for a transcription and 3.50GBP for an image of the orginal census form completed by the householder (as with the 1911 census).  Those with a PRO subscription (top one) will recieve a 10% discount. Personally, I wouldn’t bother with the transcription but go straight to the orginal as there may be transcription errors. It is also interesting to see any original comments or other information that the householder may have included! That comment applies to earlier census also. If you see a numerical code next to the occupation of the person in the record its probably placed there by the enumerator to classify the type of occupation.  The codes for each occupation can be Googled.  For the first time, the 1921 census asks for the address of the employer – you should be able to work out the place of employment of your ancestor.

The census was taken in June 1921, two months later than previous censuses because of industrial unrest in England.  June was the begining of the holiday season so don’t be surprised if your family turn up in a seaside town.  They haven’t moved house – just taking a summer break.

Some useful websites from the meeting:

For the Scottish 1921 census results go to Scotlands People www.scotlandspeople.gov.uk in the latter half of 2022. You will need to purchase credits to view original images.

The Irish republic census wasn’t taken until 1926 because of the Independance issues so will not be available until 2027. The 1901 and 1911 censuses are free on line at the website of the Irish National Archives www.nationalarchives.ie

For interesting reports on censuses visit Vision of Britain www.visionofbritain.org.uk.

A couple of free sites you may not be aware of- www.freecen.org.uk to search census and its sister site www.freebmd.org.uk to search births, marriages and deaths.  These are uploaded by volunteers and not everywhere in the UK is covered but they are excellant resources.

Finally, FindMyPast has a lot of information about the 1921 census as you would expect. If you are in the UK next year…the 1921 census can be viewed free at the UK National Archives in Kew and a couple of other major cities.

There is no meeting in  January so the first meeting for 2022 will be on the first Thursday in February.  The DNA group and the Family Tree Maker will also resume in 2022 with the dates tba.

Best wishes for the festive season and for the New Year. 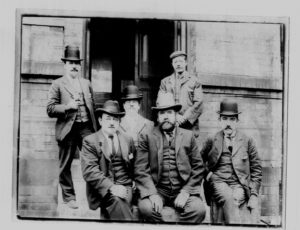 The Club Family History Group meets on the 1st Thursday of each month at 10.00 to 12.00.  We meet in the Hall. This is an activity run by volunteers for the Club. The Activity Leader is Liz Dean 0409 323 014. Contact Liz for information about the Group.

We have a common interest in researching our own family history and family history in general, including the social history of the various times our ancestors lived. We focus on (but don’t restrict to) what can be discovered from the comfort of our own homes or local libraries through the internet.

We have a topic each month either chosen by the activity leader or suggested by someone in the group. There is occasionally a guest speaker and suggestions or offers to speak are welcome. We always break for morning tea to give a chance to talk informally. We also run beginners groups on an ad hoc basis. Currently there are two additional groups running: a group for those using (or thinking of using) the software program Family Tree Maker and a group for those who have tested their DNA (or are thinking of so doing). See ‘Latest Family History Group News” on this page for meeting dates.